Filling a gap in bird research 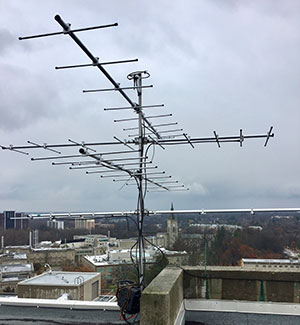 It looks like an old-fashion television antenna, but a new device installed on the roof of the Social Science Centre will fill a gap in a continent-wide network used to track bird behavior and movement.

The Motus Wildlife Tracking System is a network of telemetry arrays originally established by a CFI grant, with Western as lead, working with Acadia University and University of Guelph. The receiving network is a collaboration that allows individual researchers to track birds using transmitters they place on the animals.

Scott MacDougall-Shackleton is Chair of the Department of Psychology, and director of the Advanced Facility for Avian Research (AFAR).

“The population of some species of birds has dropped by more than 80%, but others have not been affected. To understand what is happening you need to know where they are going,” said MacDougall-Shackleton. “Until we know where they go, we can’t answer these questions. The network helps us to get an understanding of factors influencing migration and survival and understand why some species are affected and others are not.”

AFAR focuses on doing experiments to understand bird movements and behavior change in response to environmental pressures. The Motus network allows AFAR research to take experiments and go back into the field, or into the wild. This allows AFAR to house the bird, manipulate variables and see how the birds respond.

“In the past, we had the choice of doing field work or lab studies, but now we can actually merge those two approaches,” said MacDougall-Shackleton.

As an example, MacDougall-Shackleton points to work by a PhD student who is looking at how immune functions affect the ability of birds to migrate. The researcher was looking at whether being sick affected birds’ migration and whether this potentially affects how birds can spread diseases. The research experimentally activated the immune system of some birds and can track migration, as well as daily activity patterns including movement and sleep patterns.

Before the installation on the SSC, there was a gap in the network in North London. MacDougall-Shackleton says this array will hopefully allow for better tracking, especially along the river. With a position on the top of the SSC the array will have a longer range than others in the network.

While the network was initially established by Western and partners as part of the CFI grant, other organizations and people have expanded the network. Receivers can be built from commercially available parts, and open source software and plans. Operation of the network has since been assumed by Bird Studies Canada.