The Department of Sociology at Western developed around demography and quantitative analysis, a strength it carries to this day.

Demography provided a strong quantitative base, which Reuber, an economist by trade, supported, as opposed to what he viewed as “the softer side of Sociology.” Demography also set the Department out among other Sociology departments; only the Université de Montréal had a similar focus.

The Department officially opened in 1966, with five faculty members, offering an undergraduate major and a Master’s degree in Sociology.

“Grant’s vision was to establish a department that was demographically focused, which shares techniques and approach with economics, as they are both quantitative focused areas of study,” said Tracey Adams, Chair of the Department of Sociology.

Eddie Ebanks, one of the first faculty members in the department said that Reuber, “as an economist, could recognize demography.”

T.R. Balakrishnan was one of the group of five faculty members; like the others, he was focused on demography, but the first faculty members had to be flexible.  “We had to offer a full complement of courses, so all of us were teaching outside our field,” Balakrishnan remembers.

All five of the first hires, and many of the subsequent hires, came from the United States. “The 1960s were years of rapid growth for all Canadian universities, and there were very few qualified Canadian PhDs at the time,” Balakrishnan said. “Canadian universities aren’t producing PhDs in the field of demography, but the PhDs from Western do have jobs all over Canada.”

Early graduates from the Master’s program went on to roles in universities across Canada, and internationally. Other graduates took roles with Statistics Canada, the European Commission and other government agencies around the world.

Sam Clark joined the Department in 1972, and was among the new faculty hires not focused on demography. Others included Peter Archibald and Paul Grayson. 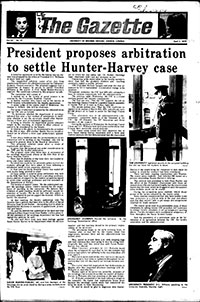 "Early on, it was clear that this Department was going to be a leader in Canadian sociology,” Gail Perry wrote. “It also served as a ‘training ground’ for students to be active in social movements and social protest.”

Through the 1970s students at Western took a very active role in expressing their opinion on the state of the university. This was most visible in 1974. Students were upset that a professor on a one-year contract did not have her contract renewed. The Sociology Course Union felt that, when making the decision the hiring committee placed too much emphasis on research and not enough on teaching. The union expressed their discontent through protests, occupying the Department for three days. A mass rally brought out more than 250 students, and a Committee of Inquiry was formed to look into the hiring decision-making process. In the end, the committee sided with the department’s decision.

“Students were looking for something to demonstrate about. The students viewed this as a case of worker oppression and grabbed on to it,” said Clark. “It was a tumultuous period on campuses, and the Department was seen as rather conservative, especially as compared to others across Canada.” 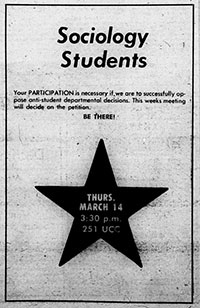 The protest was reflective of the involvement and passion students had, as well as the debate between what was important to the university – teaching or research.

The 1970s saw growth in both these areas, with the establishment of two research Centres – the Population Studies Centre and the Health Care

Research Centre, as well as increased enrolment in the Master’s programs and the establishment of a PhD program in Social Demography in 1978.

While the Department wanted to offer a more general PhD program, the government ministry in charge of universities felt this could be a duplication of the five existing Sociology PhD programs in the province, but encouraged an application in Social Demography. With that expansion, Western was the only university in Ontario to offer a PhD in demography.

Rod Beaujot joined the Department in 1976. His focus was population dynamics and joined the other faculty focusing on demography.

“With the group of seven demographers, the Department was well positioned to attract students,” said Beaujot. This included graduate students from various countries. In order to obtain a degree from the Department of Sociology, students were also required to have
a minor in another area of Sociology, and take courses in both Sociological Theory, and Methods and Statistics for Social Research.

Enrolment ebbed and flowed, with a decline in the 1970s, and a dramatic increase in the 80s and 90s, reaching a point where students were being turned away.

Through the 1980s, the Department expanded its teaching and research focus. Faculty collaborated with other Canadian departments with strengths in population studies, especially at University of Montreal and University of Alberta, and with various federal ministries.

Faculty members also secured large research grants, and “the 1980s were a time when the Department firmly established itself as a leading institution in the field of sociology not only in Canada but worldwide,” said Perry.

In 1990, the graduate program expanded to be a wider PhD in Sociology. The number of people applying to the program with a demography focus remained dominant initially, but more students turned to other areas of sociology.

Through the 1990s, the first group of faculty members began to retire, and the focus on demography began to shift.

Across the study of Sociology “there was a change in the nature of demography from formal to social,” said Clark. “At Western, we also saw the emergence of other areas of focus, including health and aging, and inequality.”

“There was a push to have a diversity of faculty and to cover various areas of strength,” said Beaujot. “This disciplinary change included a move to the more qualitative and theoretical orientations. In that, sociology at Western followed a trend in Canada and throughout the world.”

In 2005, a Criminology major was introduced, followed by an Honors specialization in 2007, expanding the undergraduate offerings and increasing the number of students.

Through the last fifteen years, enrollment in graduate programs has increased significantly, reaching a high of 78 in 2011-2012.

Alumni have continued to play important roles, including Deb Matthews, Minister of Advanced Education and Skills Development  and Deputy Premier of Ontario, who completed her PhD in Sociology while she was MPP for London North Centre Others have gone to work with Statistics Canada, the Centre for Addiction and Mental Health and to fill roles in the corporate world.

Through the changes, the Department has been “a very collegial department, very social, more than other departments or universities which is good for faculty morale and for students,” said Balakrishnan. “I always liked working with the students, enjoyed graduate teaching, and always found it interesting to see how they do after. For a professor, the most gratifying thing is to see where your students go.”

The Department still draws on its roots in quantitative studies.

The focus for current research is population dynamics and social inequality, with two new hires in this field and two additional hires coming soon. 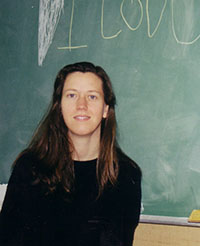 “I’m happy that the Department has established an area of concentration for Population Dynamics and Social Inequality,” said Beaujot. “The definition of an area of strength includes a larger proportion of the total department, it gives Western a specialization that stands out in relation to other Canadian universities and that is competitive compared to universities in the US and Europe.”

“What’s crucially important is an ability to respect both sides of the discipline, the quantitative and the qualitative,” said Beaujot, “and appreciate that both are making important contributions to the discipline as a whole.”

“Our goal is to produce research to inform people, but that also has policy relevance,” said Adams.

“We are already a national leader with an international profile; we want to enhance this profile in population dynamics, build this reputation and profile,” said Adams. “We strive to maintain a balance between research excellence and developing students, and we want to continue to offer strong undergraduate and graduate offerings.”

As part of the 50th anniversary celebrations, the department will establish a speaker series, supported by a donation from Balakrishnan. “The speaker series will help raise awareness of the Department and build the profile again,” said Balakrishnan. “I feel I contributed over the year to build Sociology and the population studies and I would like to see that flourish.”