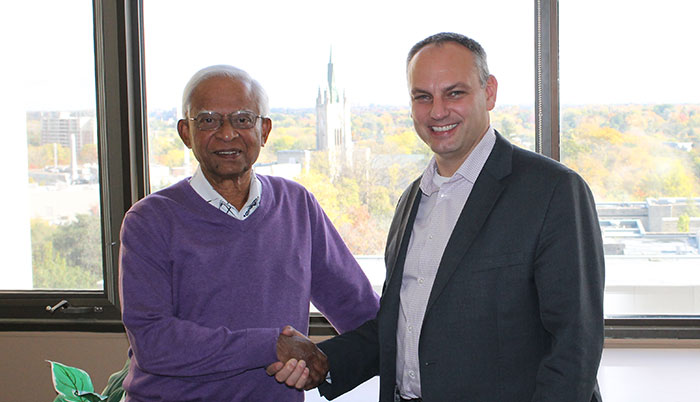 Professor Emeritus Balakrishan and Bob Andersen, Dean of the Faculty of Social Science

As the Department of Sociology is celebrating its 50th anniversary, a generous donation provided by Professor Emeritus T.R. Balakrishnan and Lois F. Leatham will establish a speaker series bringing in well-known researchers in Sociology as part of the Balakrishnan Distinguished Lecture in Population Dynamics and Inequality.

“The speaker series will help raise awareness of the department and build the profile again,” said Balakrishnan. “I feel I contributed over the year to build Sociology and the population studies and I would like to see that flourish.”

The speaker will be a person of international repute who is expected to give a scholarly lecture of broad interest not only to the Department of Sociology, but to the wider University community. The aim of the lecture is to enhance the excellence in the Department of Sociology in Population Dynamics and Inequality and to give visibility for the University in this area in the academic world.

Balakrishnan, who was one of the first five faculty members of the Department of Sociology, focused on demography is particularly interested in population studies. “I’ve seen it shrink a little and the speaker series may help bring in international students.”

The inaugural lecture will be on Thursday, December 1 with Distinguished Lecturer Dr. Douglas Massey, Professor at the School of Public and International Affairs at the University of Princeton. Massey is currently president of the American Academy of Political and Social Sciences and past-president of the American Sociological Association in and the Population Association of America.

Massey will present a talk entitled: "Segregation and the Perpetuation of Poverty."