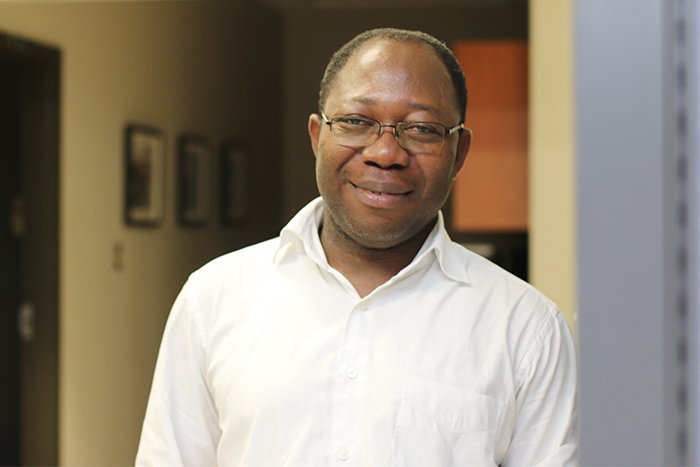 While a lack of access to safe and nutritious food can contribute to malnutrition, and a whole host of other physical effects, what, if any, are the effects on mental health?

According to Western Geography PhD candidate Kilian Atuoye, MA’16, heads of households who experience severe to moderate food insecurity – meaning they have limited or uncertain access to nutritionally adequate or safe foods, or do not have the ability to acquire food in a socially acceptable way – report elevated mental distress compared to those from food secure households.

His findings, written in collaboration with Isaac Luginaah, associate professor with the Department of Geography and Canada Research Chair in Health Geography, were recently published in the journal Social Science & Medicine.

“The World Health Organization has recognized social determinants of health … but the element of food was missing. From my fieldwork, it came out clearly that this was a big issue,” said Atuoye, who, for the study, surveyed nearly 1,500 people in northwestern Ghana, Africa, where food insecurity is an issue. “In the northern part of Ghana, we came to realize the social stigma around food insecurity and not having food to eat. You just don’t carry that burden (food insecurity) alone, you also carry the burden of being called names.”

Atuoye, who grew up in northwestern Ghana, said there are several situations in the region where social stigma plays a role in mental health and depression. For example, in communal living housing complexes, where several families share one kitchen, those experiencing food insecurity feel pressure to pretend to cook a meal to avoid being stigmatized. In rural communities, if a farmer’s family goes hungry due to an unsuccessful crop one year, the community perception is he can’t feed his family because he is lazy.

Even children are faced with social stigma related to food scarcity.

“I remember, when growing up in Ghana, some families that really felt food insecurity at certain times of the year – when you are kids, playing outside and living among them and calling them names. Kids would go to their house crying; saying ‘this kid was calling me names,’” Atuoye said. “You can see, apart from malnutrition, the burden of being locked up inside and parents not allowing their kids to go outside and play – that alone contributes to depression. That affects kids growing up.”

The research study also revealed female household heads, compared with their male counterparts, were more likely to report elevated mental distress as a result of food insecurity. Atuoye said this could be that while the majority of the household heads surveyed were male, and had the responsibility to provide grains for the family, women generally carry the greatest burden related to food because they are responsible for the day-to-day cooking.

While food security is a big issue in sub-Saharan Africa, Atuoye said even in the Canadian context it’s a problem in some areas; as is stigma. However, there are systems in place to combat food insecurity in Canada. In Ghana, those same formalized structures don’t exist.

Going forward, Atuoye hopes his research will shed some light on the need for policies, in Ghana in particular, that address mental health within the context of food insecurity. “Food access hasn’t been elevated to the level of mental health. We need to, in terms of policy, try to relate these two together and provide a mental-health policy and pay attention to a person’s access to food as a social dynamic.

“Those who feel food insecurity already know what it is, but those who make the policies probably don’t appreciate it because they’re probably not experiencing food insecurity. This research hopefully shows policy-makers, especially, there’s a link when it comes to food and mental health and there’s a need to take some action around it.”

For his PhD research, Atuoye will be expanding on his previous study by linking land acquisitions to food production, food access and health and wellbeing in Tanzania.