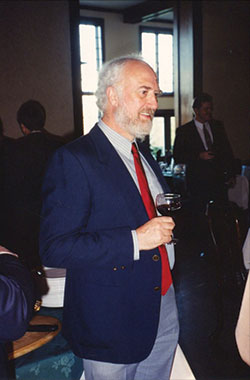 Roger Hatton King, Emeritus Professor and former Chair of the Department of Geography, passed away in Penicuik, Scotland on August 5th, 2018 at the age of 76. He is survived by Gill, his wife for 53 years, who lives in Peebles, and their daughters, Rhiannon and Cristyn, in Edinburgh.

Dr King was recognized throughout Canada for his expertise in pedology and as a protagonist for and expert in Arctic science. A council member of the Canadian Association of Universities for Northern Studies (ACUNS) from 1978-1996, he served as a Director from 1991-1996 and President from 1993-1995. He was involved in several national and international working groups concerning global/climate change projects and policy in the Arctic in the early 1990s.

At UWO he chaired the Northern Research group from 1979-1997 and developed a strong Arctic programme in the Department. Between 1986 and 1997 he obtained funding that allowed 22 graduate and undergraduate geography students to carry out field studies for a variety of pedologic, geomorphic, geochemical and paleonvironmental projects in the Truelove Lowlands of Devon Island in the High Arctic. These resulted in new published studies of lacustrine geochemistry, paleolimnology and raised shorelines that have defined the post glacial history of this classic arctic environment. Many of his students have gone on to academic careers or work as specialists in provincial or national environmental agencies.

In 1972 he founded and subsequently directed the Pedology Research Laboratory in the Department, developing and providing training and expertise in sophisticated soil analytical techniques supported with major equipment funding from ADF and NSERC in collaboration with colleagues from Geology. Early in his career he authored several pioneer studies on volcanic ashes, including their role in soil development in the Canadian Rockies. He also published studies of clay minerology and soil development in Southern Ontario. Together with students he utilized innovative techniques to identify chemical tracers in soils from archeological sites at First Nation sites in southern Ontario and to determine the provenance of pottery at archeological sites in Cyprus. During his career he was author of over 30 refereed papers and more than 50 conference presentations.

In a long career Dr King served on many committees at the University, provincial and national levels. He chaired the department for nine years during a period of considerable change making significant new appointments (11) almost half of whom were women.

A memorial service will be held at the Melrose Borders Crematorium (Scotland) at 2 p.m. on August 22, 2018. In lieu of flowers, friends who wish to make a donation to honour Roger are asked to consider their local Alzheimer's Society.

In memory of Roger the flag on UC tower will be lowered on Wednesday, August 22nd, 2018.

- with notes from Brian Luckman